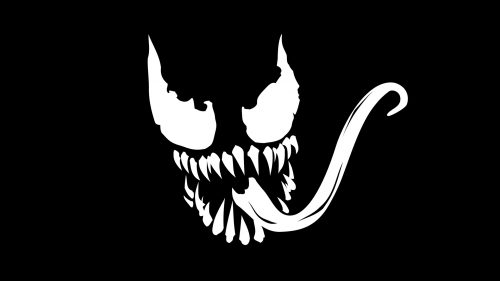 Allpicts.in – After publishing a Venom Marvel wallpaper for mobile phones as a badass wallpaper, here again, my newest wallpaper of Venom. This wallpaper is featured a white artistic symbol of venom with a dark background. This wallpaper was configured in HD resolution with 1920×1080 pixels. So, it can be perfect for a desktop background.

Originally, Venom is a fictional character appearing in American comic books published by Marvel Comics. The character is a sentient alien Symbiote with an amorphous, liquid-like form, who requires a host, usually human, to bond with for its survival. The character of Venom was originally introduced as a living alien costume in The Amazing Spider-Man #252 (May 1984) with a full first appearance as Venom in The Amazing Spider-Man #300 (May 1988).

In the film, Venom appears as the primary antagonist in the 2007 feature film Spider-Man 3. The Venom Symbiote has a cameo appearance at the end of the 2014 feature film The Amazing Spider-Man 2. In March 2016, following the introduction of Spider-Man to the Marvel Cinematic Universe, it was announced that Sony was moving forward with a standalone film. A year later, Sony announced that Venom would be released on October 5, 2018. In May 2017, Tom Hardy was announced to be cast as Eddie Brock / Venom.

I use this wallpaper as one of the collections of Venom wallpapers. Feel free to collect all wallpapers by visiting our gallery below: