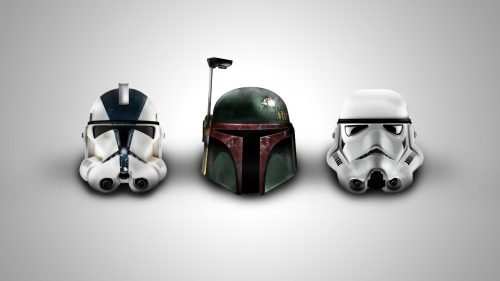 This picture of Boba Fett and Trooper Helmets can be a symbol of Star Wars. That’s why that I categorize this picture as the Star Wars wallpaper #4 of all 23 best selection. Just download and set this picture as your laptop or PC desktop background. Who is Boba Fett? With his customized Mandalorian armor, deadly weaponry, and silent demeanor, Boba Fett was one of the most feared bounty hunters in the galaxy. His weapons are Flame Thrower, Blaster Rifle.

Another helmets are Trooper’s helmet, the most famous troopers are Scout troopers and stormtrooper. They are fictional soldier in the Star Wars. The troopers can be categorized by their helmets. There are various type of troopers, including: Clone Trooper, Storm Trooper, Scout Trooper, Snow Trooper, AT-AT Pilot, Aqua Trooper and many more.