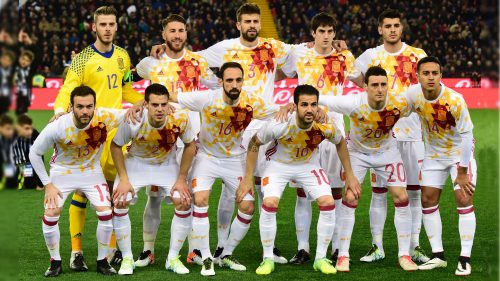 After publishing the Spain national football squad with their home jersey, this is a wallpaper of Spain Football team 2016 with second jersey or away jersey. The Spain 2016 Authentic Away Soccer jersey is inspired by the passion and the emotion of the moment of  UEFA EURO 2012™ final. The jersey displays a large front graphic that emulates a heat map of Torres’ epic goal in EURO 2012 using triangular shapes inspired by la Roja’s tiki-taka style of play. It also featured with a team badge on the left chest and a ventilated climacool® design to keep the player cool on the pitch.