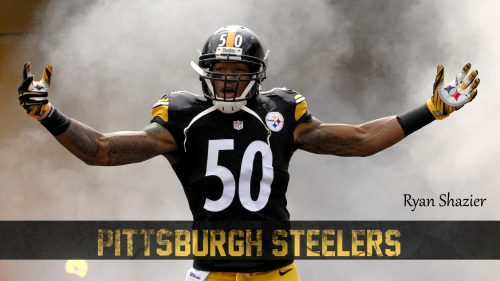 This wallpaper is the #21 of all 37 pictures with Pittsburgh Steelers theme. The wallpaper shows you a photo of Ryan Shazier, the #50 of Pittsburgh Steelers player as linebacker. He was drafted by the Steelers in the first round of the 2014 NFL Draft. He played college football at Ohio State. Coming out of Ohio State, many analysts and scouts projected him as an early-to-mid first round draft selection. He was ranked the third best outside linebacker and the 19th best prospect by NFLDraftScout.com. The Pittsburgh Steelers selected Shazier in the first round with the 15th overall pick in the 2014 NFL Draft. On June 5, 2014, the Pittsburgh Steelers signed Shazier to a fully guaranteed four-year. After his rookie season, in 2015 Shazier returned the next season to again be the starting inside linebacker. Shazier returned to his starting inside linebacker role to begin the 2016 season. On April 24, 2017, the Steelers picked up the fifth-year option on Shazier’s contract.