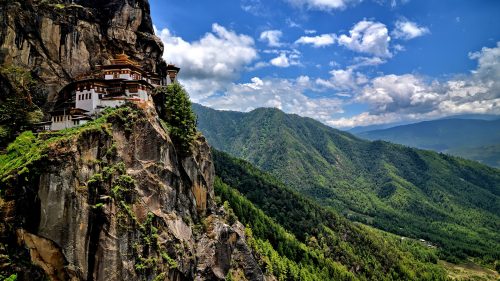 I share you this beautiful picture of Paro Taktsang Monastery as the third of 10 Bhutan Tourism from India Series. It’s featured with a high resolution picture with 1920×1080 pixels. This picture also can be a good alternative for desktop background or laptop background.

People also call this place as the Tiger’s nest. Another name of Paro Taktsang is Taktsang Palphug Monastery. Today, Paro Taktsang is the best known of the thirteen taktsang or “tiger lair”. It’s an elegant structure built around the cave in 1692 and has become the cultural icon of Bhutan.

Bhutan is a landlocked country in Asia, one of the smallest state which located in the Eastern Himalayas. Bhutan is bordered by China in the north and India in the south.
How to visit Paro Taktsang Monastery from India?

If you have a plan to visit Paro Taktsang Monastery from India, it’s better if you to order some north India tourism packages at local India travel company. Commonly , the destination to Paro Taktsang is listed in the package. There are also many travel agents in Delhi India which offering you Bhutan tour packages.