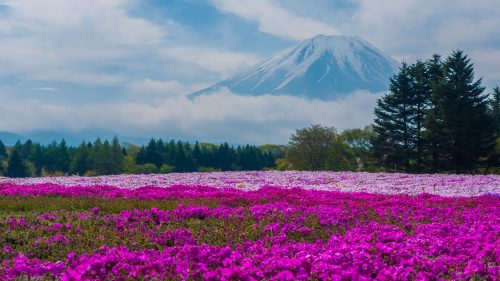 Allpicts.in – This picture of Mount Fuji Japan looks so awesome with Fields of Pink Moss flowers at Mount Fuji. The pink moss flowers are known as Shibazakura, which usually looks best around the first three weeks of May. Mount Fuji is the mountain peak in Japan with 3,776.24 m (12,389 ft) height. This mount is a well-known symbol of Japan and it is frequently depicted in art and photographs. There are a lot of places in Japan to view mount Fuji.

This mount Fuji view is taken from Lake Motosuko, the westernmost of the Fuji Five Lakes. The best moment to visit this place is at the Fuji Shibazakura Festival. This festival is held between mid-April to early June. Fuji Shibazakura Festival is one of the best and most popular occasions nationwide to see Shibazakura (pink moss or phlox moss in English). There are about 800,000 stalks of Shibazakura of five varieties which produce delightful fields of pink, white and purple colors in different hues.