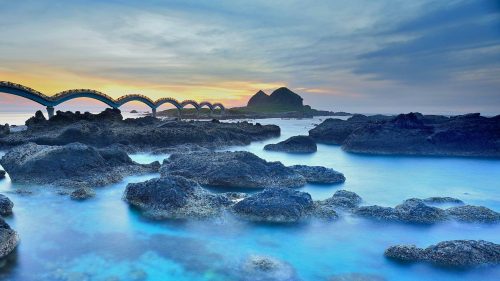 I would like to share you this picture of one of the most beautiful place in the world. This is the Sanxiantai Dragon Bridge in Taitung, Taiwan. A gorgeous photo which taken with low exposure effect which produces an awesome atmosphere to the photo. Originally, this photo was uploaded by Charoen on Google Plus and I think that it can be a good alternative for customizing your desktop background. Configured in HD 1080p resolution, this photo has 1920×1080 pixels. So, it can be perfect background for widescreen monitors.

Sanxiantai Dragon Bridge also known as Sansiantai is a long foot bridge connecting the main island of Taiwan with Sanxiantai island. The island has three extremely large rocks which also popular as “Platform of the three immortals.” Sanxiantai bridge was completed in 1987 and has 8 segments that are designed in the shape of waves.