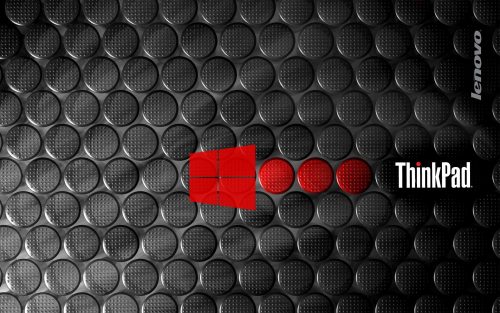 Allpicts.in – After publishing my previous OEM Windows 10 wallpaper for Lenovo, here again, is a special wallpaper for Lenovo ThinkPad laptops. It featured a high-resolution 3D design in black color. There is a logo of Windows 10 in red color. Black and Red is the official color of ThinkPad, a Lenovo laptop series.

ThinkPad is a line of business-oriented laptop computers and tablets designed, developed, marketed, and sold by Lenovo, formerly IBM. There are several models of Lenovo ThinkPad. Including ThinkPad Yoga (2013 – current), Tablets, ThinkPad 11e, E series, L series, T series, X series, and P series. ThinkPads are known for their minimalist, black, and boxy design which was initially modeled in 1990.

By the way, I’m collecting a lot of wallpapers for Windows 10 laptops and PCs. I recommend you choose and download the wallpapers you might like by visiting the links below: