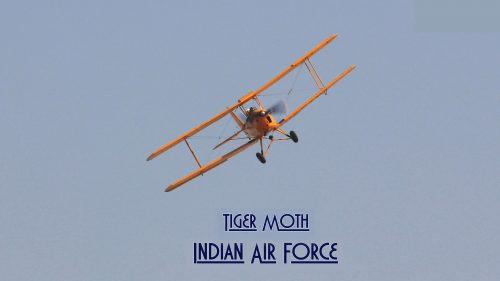 This is a cool picture of Tiger Moth aircraft, one of the vintage of Indian Air force. The full name of this aircraft is The ‘de Havilland DH82 Tiger Moth’, a two-seater, single-bay bi-lane powered by a 145-horse power Gypsy Major four-cylinder inverted air-cooled engine. This aircraft was the primary trainer aircraft for the Royal Air Force during World War II. The manually flown, all wood-and-fabric aircraft was a property of the Air Force Museum in Palam, New Delhi, until a few engineers came up with the idea of making it fly again — something it hadn’t done since the 70s.  The aircraft was rebuilt in the UK by a company called Reflight, between 2007 and 2012. “The aircraft can’t fly faster than 110 kmph, and only at a height of 2,000-3,000 feet.

Moreover, I use this picture as one of the collection of Airplane images. I recommend you to download another pictures of airplane by visiting our gallery below.