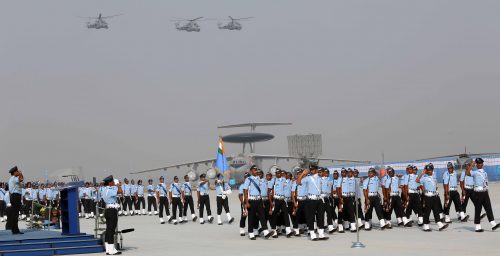 This is the first Indian Air Force wallpaper on this website. I share you this in order to give you more collection of Indian Military wallpapers. This photo was captured during Air Force Day parade in India and was taken from official website of Indian Air force – http://indianairforce.nic.in/.  This photo is featured with a high quality photo of Mi-35s in Chakra formation Fly Past During Air Force Day Parade. Mi-35 is one of the active Indian military aircraft and the export version from Russia for the Mi-24V.

Moreover, I hope that this picture of Indian soldiers and the helicopters will be a good alternative wallpaper for your desktop background. I recommend you to add another collection of Indian military wallpapers by visiting our gallery below: