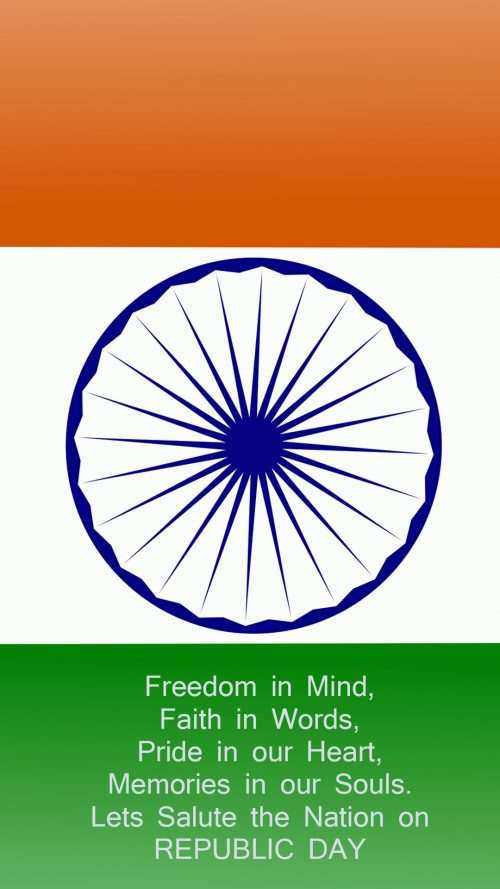 Allpicts.in – #RepublicDay #RepublicDay2022 #RepublicDayParade #RepublicDayContest #RepublicDayIndia #RepublicDaySpecial. I would like to say “I’m sorry” for editing the Indian flag by adding some text. But I recommend you to use this flag picture to express your nationalism. This is a Happy Republic Day wallpaper for mobile phones with a greeting text. The text is:

Freedom in Mind,
Faith in Words,
Pride in our Heart,
Memories in our Souls.
Lets Salute the Nation on
REPUBLIC DAY

It’s also featured with three colors of an Indian flag (saffron, white and green) and Ashoka chakra at the center. Due to using this wallpaper for the mobile screen, this wallpaper has been configured in 1080×1920 pixels. So, it is suitable for most smartphones.

Many people throughout India celebrate the nation’s Republic Day, which is a gazetted holiday on January 26 each year. It is a day off for the general population, and schools and most businesses are closed. What do the Indian people do? Much effort is put into organizing events and celebrations that occur on Republic Day in India. Large military parades are held in New Delhi and the state capitals.

Finally, feel free to visit our Tiranga picture gallery below to download another wallpaper for celebrating Republic Day.