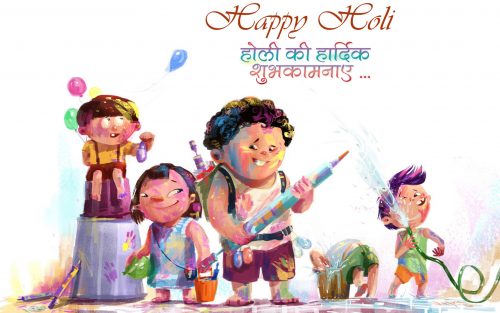 Allpicts.in – This Happy Holi Image is free for you, just download and use this wallpaper as your desktop background. This wallpaper is featured a funny cartoon picture of several kids playing at a Holi party. Holi is a special spring festival in India and Nepal. The festival is also known as the festival of colours and the festival of sharing love.

Read also: Greeting Card for Saying Happy Holi to You and Your Family

When is the Holi festival?

The festival date, which is determined by the Hindu calendar, varies from year to year on the Gregorian calendar. Holi 2023 is on Wednesday, March 8th in India. March 7th (full moon night) is the time for Holika Dahan.

What are people doing while Holi?

Basically, Holi is an ancient Hindu religious festival which has become popular with non-Hindus in many parts of South Asia and outside Asia. The first day of Holi is Holika Dahan or Chhoti Holi, and the second day is Rangwali Holi or Dhulandi. People do the “Holika Bonfire” where people gather, do religious rituals in front of the bonfire, and pray. After that, the next morning, they celebrate Rangwali Holi – a free-for-all carnival of colours. All people play, chase and colour each other with dry powder and coloured water. They also carry water guns and coloured water-filled balloons.

I use this wallpaper as one of my best selections of Holi India wallpapers. Feel free to download other images of Holi by visiting our gallery below: