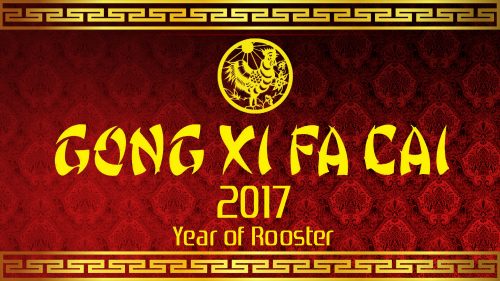 In order to completing the wallpaper for Chinese New Year, here is a picture for popular greeting of Gong Xi Fa Cai 2017. This wallpaper is one of my best collection that you can download for free. Several features including: the text of “Gong Xi Fa Cai”, red pattern background, oriental gold colored borders, gold colored symbol of the Rooster, the text of “2017” and the text of “Year of Rooster”. Seems like my other favorite wallpapers, this wallpaper has a resolution of 1920×1080 pixels. This resolution also known as HD or 1080p picture.

How to say Happy Chinese New Year in Chinese language?

Due to share you many ideas to send your Chinese friends with Happy Chinese New Year pictures, here are our best selection that you can download for free: