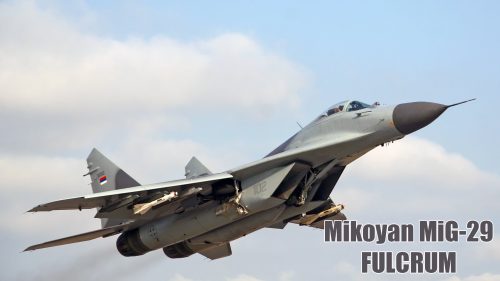 On our previous post, I shared you the MiG-35 Fulcrum. This is another fighter jet wallpaper with picture of Mikoyan MiG-29 of Serbian Air Force and Air Defence. Air Force and Air Defence is a manoeuvre service of the Serbian Armed Forces. They are intended to provide control and protection of the sovereignty of airspace, deter aggression, air defense of the territory and important facilities. This picture was taken by Krasimir Grozev/Wikimedia/CC BY-SA 3.0 on August 26, 2011 when Serbian MiG-29 fighter jet carrying a pair of R-60 (AA-8 Aphid) missiles. This photo was been edited by adding a text of “Mikoyan MiG-29 FULCRUM” and been resized into HD resolution with 1920×1080 pixels.

The Mikoyan MiG-29 FULCRUM is a twin-engine jet fighter aircraft designed in the Soviet Union and manufactured by Mikoyan. The MiG-29 has also been a popular export aircraft; more than 30 nations either operate or have operated the aircraft to date. In 2013 the MiG-29 was still in production by Mikoyan.

Furthermore, I hope you will love to download and use this fighter jet wallpaper as your desktop background. As an alternative, you can also visit our gallery below to get more wallpapers of fighter jet.