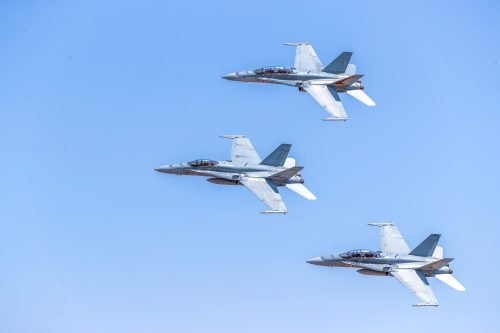 Captured in flight formation, they are the Royal Australian Air Force F/A-18B Hornets. They are multi-role fighter aircraft and capable of air-to-air and air-to-ground missions. This photo was uploaded by John Torcasio and published on unsplash.com. I use this picture as one of the collection of fighter jet wallpapers and free to download. As a picture with high resolution, this photo is perfect for customizing your desktop background. So, just download and share this photo to your friends.

There are two types of Hornets F/A: The F/A-18A (single seat) and F/A-18B (twin seat) Hornets. The Hornet was developed for the US Navy and Marine Corps, and has been a very successful aircraft. The F/A-18A and F/A-18B Hornets can undertake: air interception, air combat, close air support of ground troops and interception of enemy supply lines including shipping.

Moreover, I hope you will love to download and save this fighter jet picture. As an alternative, you can also visit our gallery below and download another pictures.