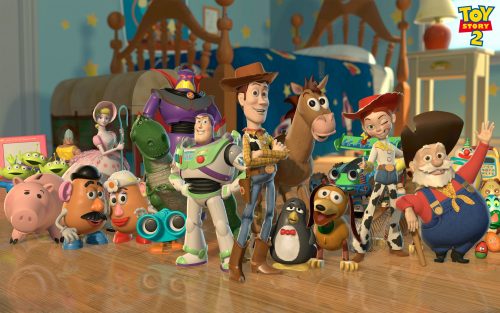 Here is another best Pixar animated desktop backgrounds that you can download, this is the Toy Story 2 wallpaper. This animation comedy film was released on November 13, 1999. It is the sequel to the 1995 film Toy Story. Many of the original characters and voices from previous Toy Story return for this sequel, and there are also several new characters here.

In Toy Story 2, the main character – Woody is stolen by Al McWhiggin – a greedy toy collector – who wants to sell him to a museum in Japan. Finally, his friends – Buzz, Rex, Hamm, Mr. Potato Head and Slinky Dog rescued him by embark on a journey across the Tri-County Area.

This wallpaper is one of the best selection of Pixar animation films, designed in high resolution with 3840×2400 pixels.  You can directly download this wallpaper on it’s original size. You can also convert this file into other size by choosing the size on below available downloads area. This wallpaper will be a good collection for animation movie collector. It also can be a good alternative for customizing your desktop background.