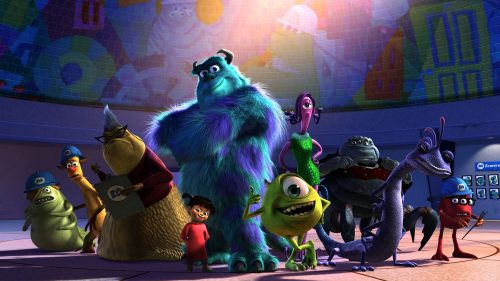 This is a high resolution of Monster Inc wallpaper, one of the best  Pixar animated films for desktop backgrounds. Monster, Inc. is the fourth of Pixar’s film which released on November 2, 2001. A comedy film directed by Pete Docter, produced by Pixar Animation Studios, and released by Walt Disney Pictures. Monster, Inc. is a factory where monsters enter the Human World to scare children. On 2013, Pixar launched the prequel of this film with Monster University.

In Monster, Inc., there are two main characters as the monster: James P. “Sulley” Sullivan (John Goodman) and his one-eyed partner and best friend Mike Wazowski (Billy Crystal). Monsters, Inc. is set in Monstropolis, a city inhabited by monsters. The problem began when a human girl named Boo enters their world. James P. Sullivan and his assistant Mike Wazowski must return her.

This picture of Monster Inc can be a good alternative to use as desktop background or laptop background. Designed in 1920×1080 pixels, this wallpaper will be a perfect background for monitor with widescreen type. A widescreen display is a device with 16:09 aspect ratio.