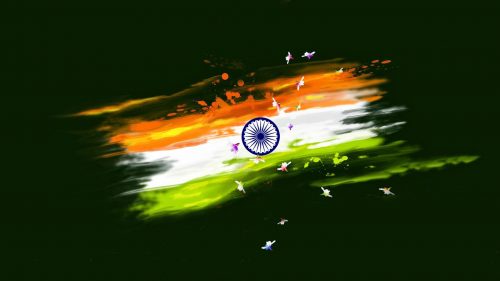 Allpicts.in – #IndependenceDay2022 #IndependenceDay – I found this abstract paint India Flag decoration when preparing for designing the Independence Day wallpaper. I believe that this picture is one the perfect alternatives to celebrating Indian Independence Day on 15 August. Featured with an abstract tricolor painting with a dark background and several accessories, this Indian flag HD wallpaper looks cool. The resolution of this pic is 1920×1080 pixels, a resolution also known as Full HD or 1080p picture.

On 15 August 1947, Jawaharlal Nehru, the first Prime Minister of India, raised the Indian national flag above the Lahori Gate of the Red Fort in Delhi. So, 15 August becomes the Independence Day of India. A national holiday in India commemorating the nation’s independence from the British Empire. The holiday is observed throughout India with flag-hoisting ceremonies, parades, and cultural events.

I believe that you will need more inspiration to prepare the Independence Day celebration. Here are several related wallpapers with Indian Flag decorations you might like.